"Buy only the things you need, adhere to simplicity or minimalism, and invest your money wisely."

A real estate property is among Kris Bernal's top choices when deciding where to invest her hard-earned money.

Early this year, the GMA-7 actress finally crossed an item off her bucket list, and bought a house and lot in California, U.S.A.

It was around the first week of June when Kris shared a photo with her Instagram followers of her recent purchase.

The Asawa Ko, Karibal Ko actress was then having a short vacation in the U.S., but she bought the house in February.

Kris told PEP.ph (Philippine Entertainment Portal) in an exclusive interview via e-mail, "We started looking for a house since June 2017. I was able to close a deal in February 2018, and the house turnover was April 2018."

In a previous interview with PEP.ph, Kris said it was also her mom Analyn Tan's "long-time dream" to have a vacation house in the U.S. It became a logical idea when her older sister, Katie, decided to pursue her career as a nurse in Los Angeles.

"I started dreaming [of] a house in the U.S. about three years ago when my sister left for the States. Masarap din siguro may own house sa U.S. para I can go there anytime I want."

She added, "My mom encouraged me to buy a house in LA. It was more of a vacation house where we, especially me, can stay for a respite while enjoying the cool weather, scenery, shopping, and get together with friends and relatives." 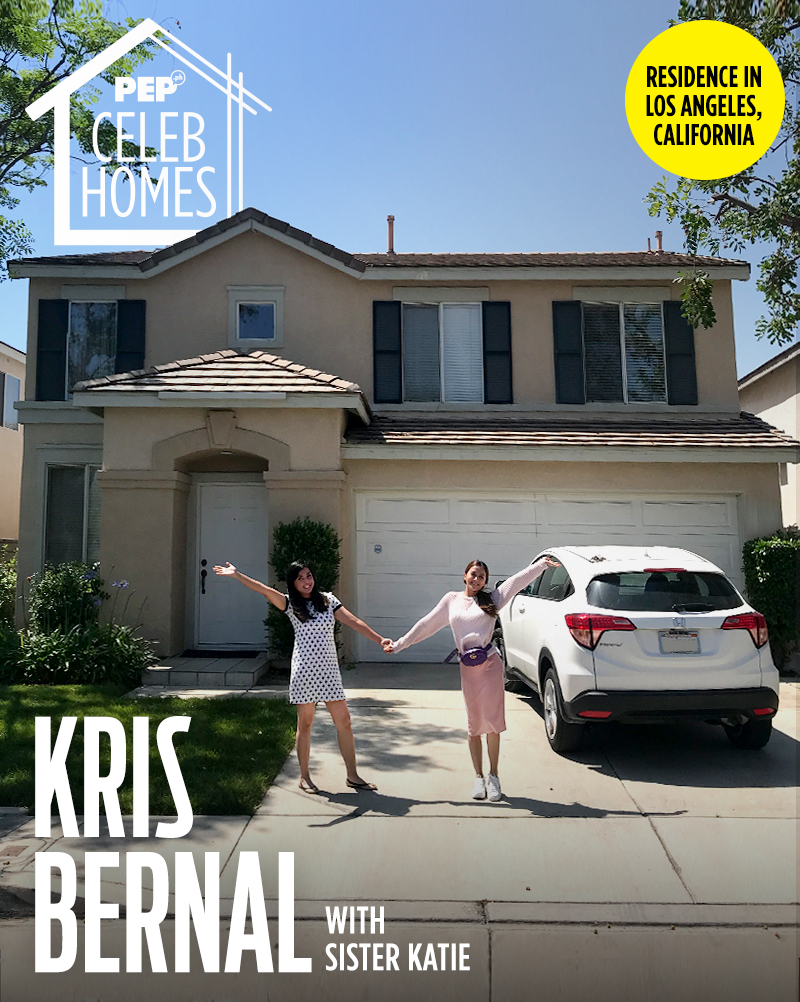 "It was easy to scout for a house in the U.S. kasi lahat nasa site ng Zillow and Redfin," Kris said when asked how they found the house.

"Ibang-iba ang process ng pagbili ng house sa U.S. than in our country. It was a great ride experience."

Zillow and Redfin are well-known online real-estate database companies based in the U.S. 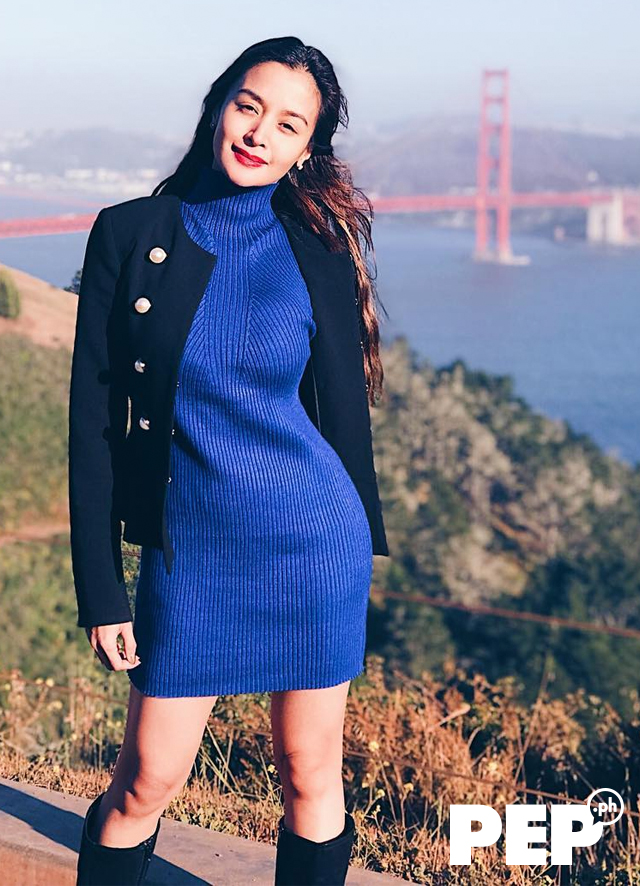 The house can be found in a gated community in West Covina, Los Angeles.

The fact that the pleasant suburb has many Filipino residents was among the things that convinced Kris to purchase the house.

"My consideration in buying the house is of course the price, the facade--I wanted a modern two-story house with 4 to 5 bedrooms, and in a safe community."

She added, "It was my sister [Katie] who influenced me to choose West Covina. Most of her friends are from that area, so at least she won't feel sad living alone in the U.S. Until now kasi, naho-homesick pa rin siya sa amin kasi mag-isa lang siya doon."

"We have a close-knit family. We are a team, may synergy. I am closer to my two elder sisters, pareho kami ng likes, so we consult each other." 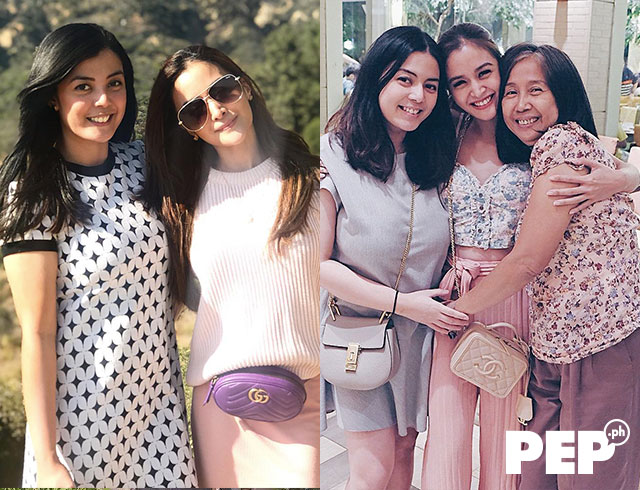 Kris definitely feels that buying the house is a good investment since its estimated value has increased since she bought it. According to a real-esate website, the house now has an estimated value of $614,002, which is around PHP33 million.

It took years of hard work and a lot of sacrifices before Kris was able to buy this house under her name, but she noted that her mom "contributed some funds."

Read How Kris Bernal saved up for a house in the U.S.

When asked for a money-saving tip, she said:

"Buy only the things you need, adhere to simplicity, or minimalism and invest your money wisely."

The first time she set foot in it as its owner, Kris said it was surreal and quoted Brazilian novelist Paulo Coelho, "And, when you want something, all in the universe conspires in helping you to achieve it."

Here's her living room, which has a high ceiling. 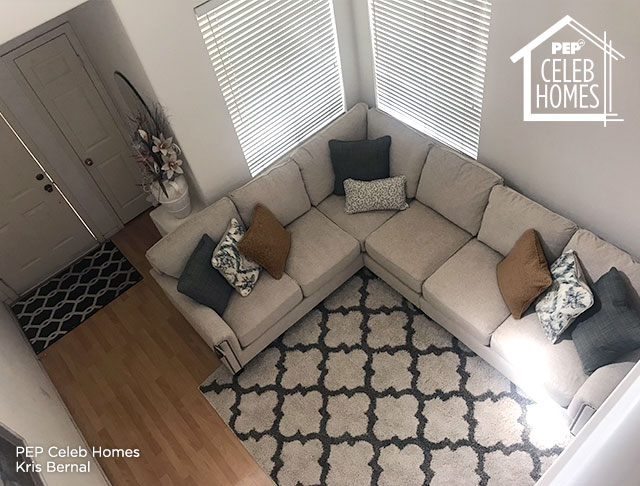 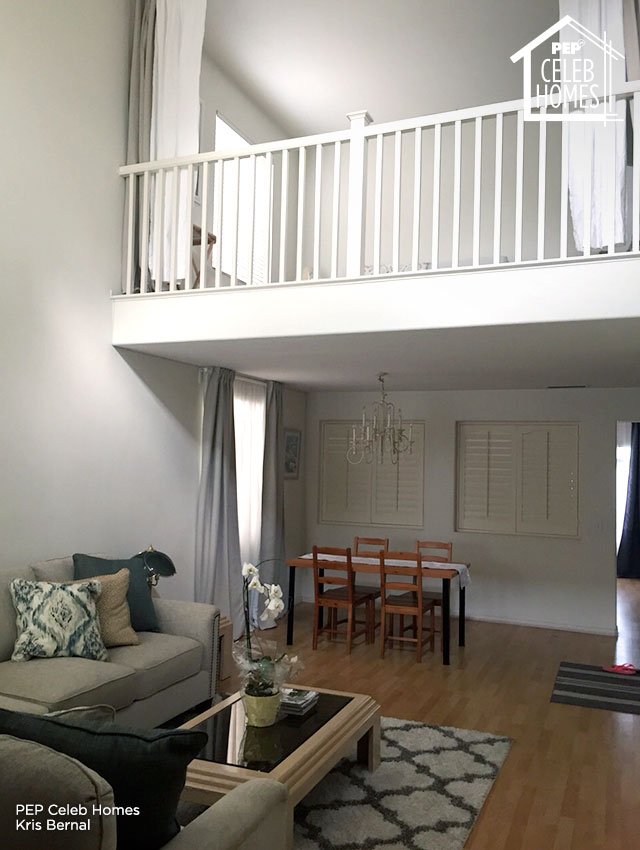 The main level--from the living room up to the kitchen area--has hardwood floors.

Meanwhile, granite countertops in the kitchen area complement the earthy elements of the actress' modern-minimalist home.

Currently, the interiors feel a little bare since they are still in the process of buying new appliances and furniture pieces. So far, they have the essentials such as sofas and beds. 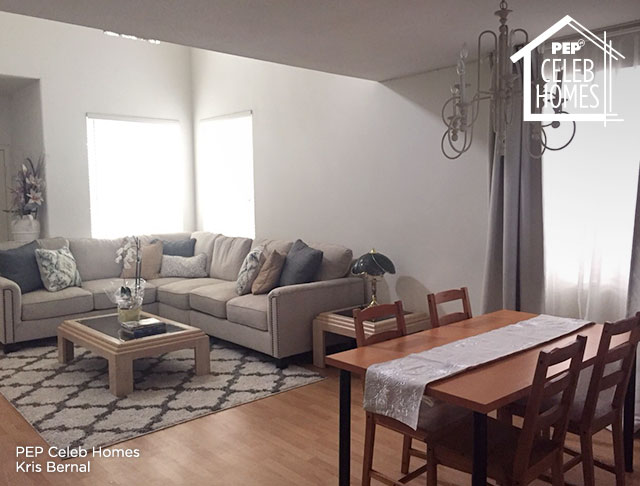 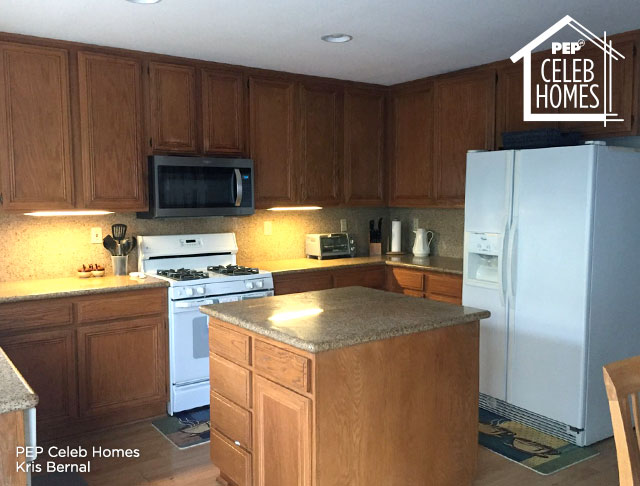 All four rooms and the open loft can be found on the second level of the house.

The Starstruck alumna is having three of the rooms rented out. 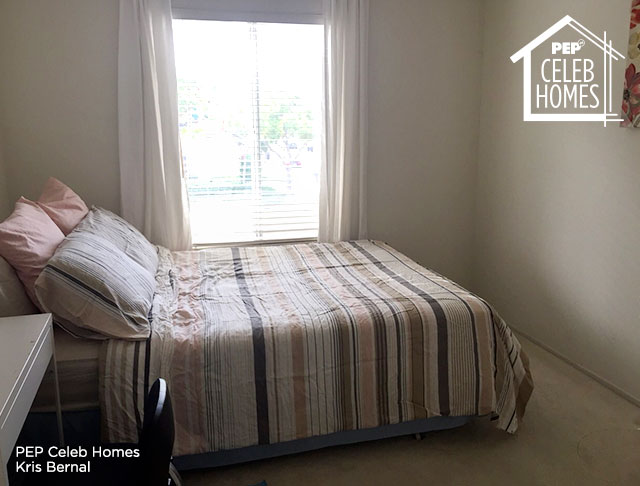 Kris and her family also hang out in the loft area, which has a wooden sofa and a single side table. 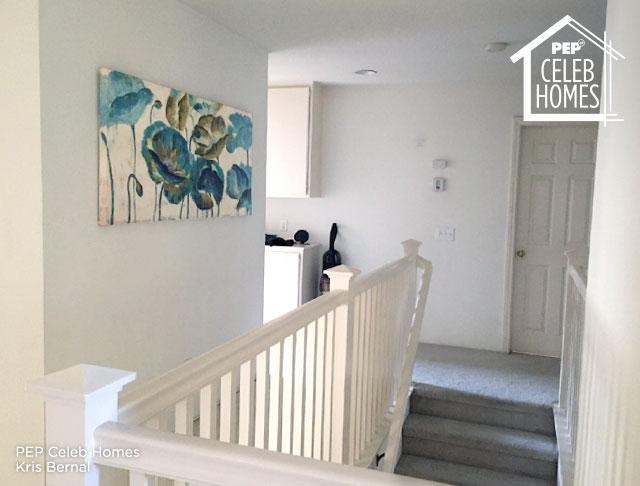 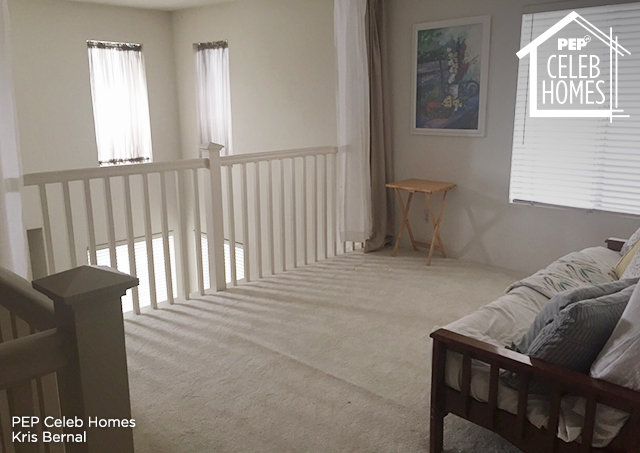 What's her favorite spot in the house?

"My favorite is the master's bedroom kasi hang-out place ko iyan. I bought a king-size bed which is too big for me, pero yon ang type ko, e."

It also has its own bathroom and walk-in closet. 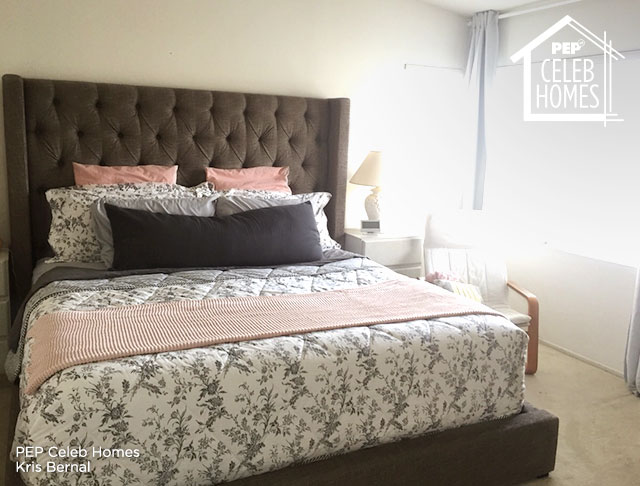 Aside from the one inside the master bedroom, Kris's house has two more bathrooms.

The house also has a separate family room with a fireplace. 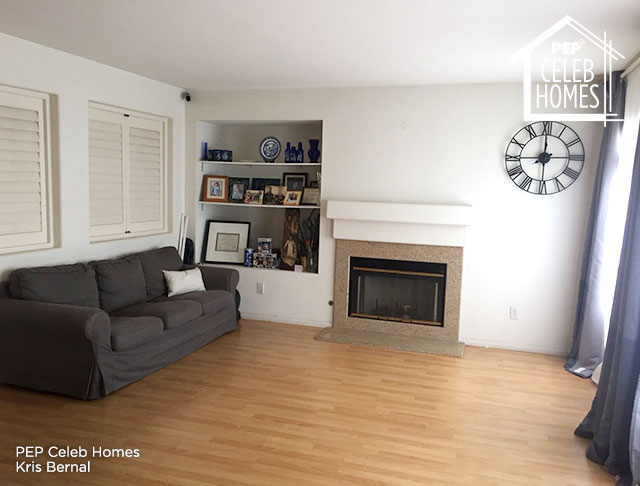 The property also boasts of a backyard with covered patio and a two-car garage, which is directly connected to the house. 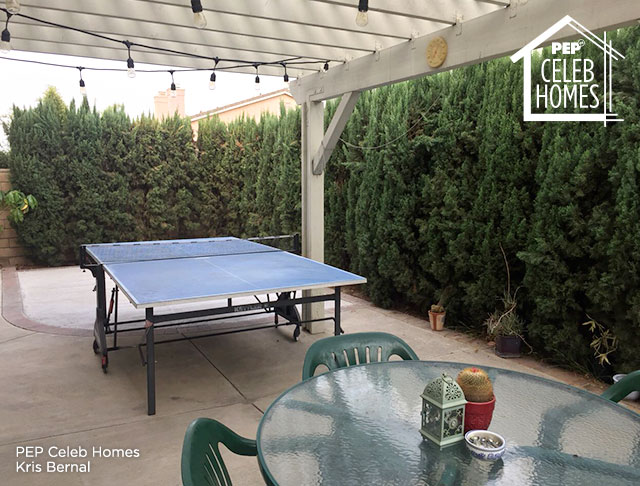 PEP.ph asked Kris if the thought of retiring from showbiz and just pursuing a simple life in the U.S. has crossed her mind.

She continued, "My passion is acting. I don't intend to live in the U.S., vacation lang gusto ko."

Kris is now on to her next goal, and is, in fact, one step closer to achieving it since she already bought a lot in Quezon City in 2013.

This is where she plans to build her dream home.

Kris feels fulfilled every time she crosses an item off her bucket list. These goals inspire her to work harder. So far, she has invested in three real-estate properties.

"I have a U.S. house, a condo in Makati, and a lot in QC area where I will build my dream house."

Now, she's focused on growing her Korean barbeque restaurant business called House of Gogi and her own lipstick line.

"Aside from House of Gogi, I've been working on a passion project which is a lipstick line and hopefully will launch it before 2018 ends.

"There's so much I wanna accomplish. Gusto ko din bumili ng commercial lot sa QC, tapos patayuan ko ng building. I am building up my savings again so I can buy a commercial lot.

"This makes my life interesting hoping that all my dreams will come true.

"Hopefully one day, I would be successful in building and running my own empires." 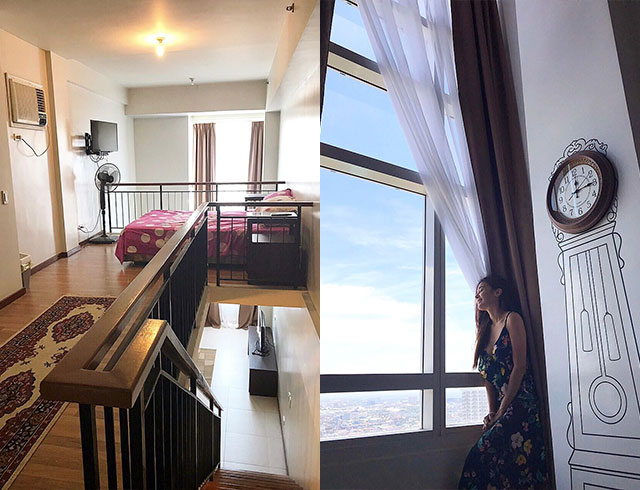 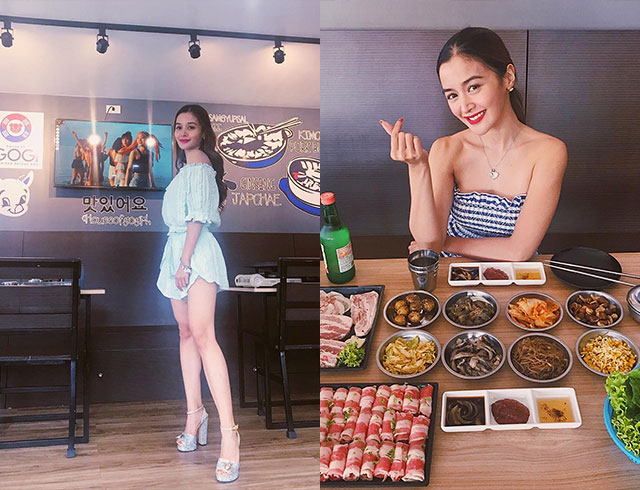 TAKING THE NEXT STEP

It seems Kris has already planned out everything, even her love life. Last September, Kris and her non-showbiz boyfriend celebrated their first anniversary.

The couple met in September 2016 when she opened her first business venture: A burger stall in Quezon City.

She recalled, "I met my boyfriend in my first outlet of Meat Kris. He is the corporate chef of their family business which supplies imported meat and dairy, he became the supplier of my burger patties then."

When Kris opened her Korean barbecue grill restaurant in June 2018, she decided to close down all her burger joints.

Back to Perry, her boyfriend, Kris described him as "simple, kind-hearted, and hardworking."

A year into their relationship, Kris has learned more things she loves and appreciates about him.

"He is a mature person, very supportive, and humble. He is a wise-spender like me, too.

"Not to mention, he's really good in the kitchen and prepares me baon every day." 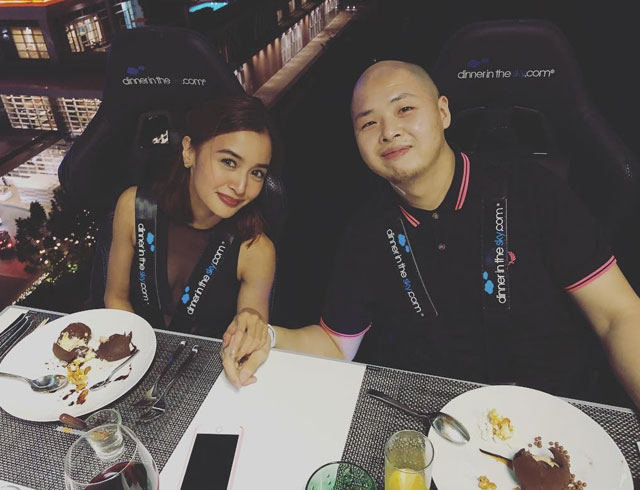 The actress-entrepreneur said she wanted to date a non-showbiz guy after her series of highly-publicized relationships with fellow celebrities.

"Wala akong boyfriend when I met him. I am happy and peacefully secure with him."

Have they talked about settling down?

The 29-year-old Kapuso said she still has so many goals to achieve.

She explained, "I still enjoy my showbiz career. As long as I'm still getting projects, I would not leave showbiz.